Dash awoke to a loud rumbling next to him. He’d left his phone on the end-table and it was vibrating loudly on top of the glass. He sat up and checked his phone.

Huh? Where am I, and how did Ken Jeong get my number? he thought to himself, maybe someone outside can answer that, I hear voices coming from downstairs.

Dash left his room and bumped in to someone on the stairs.

“Excuse me. Do you know what’s going on here?” Dash asked the woman. 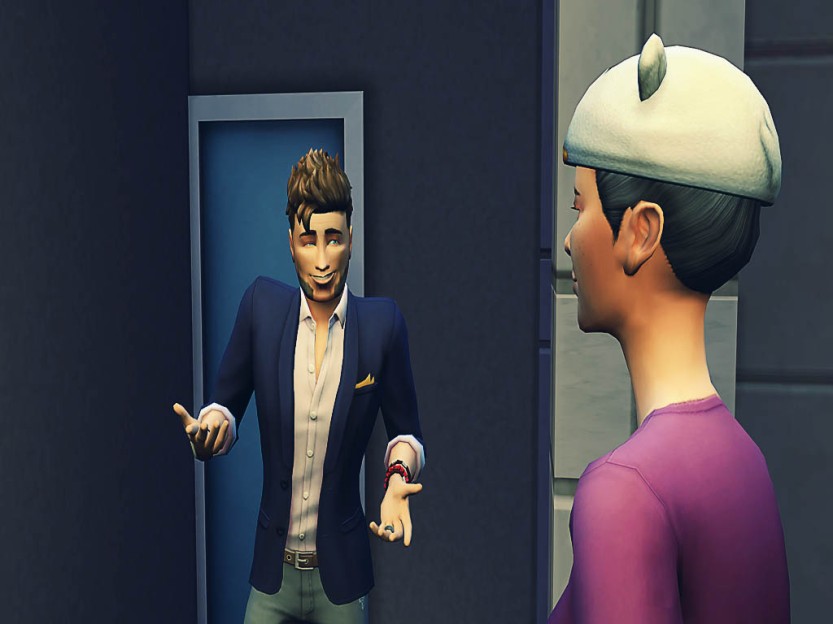 “Of course I do.” she replied, “But Elder explains it so much better, why don’t you go find him. I think he went downstairs”

“Thanks. My name is Dash by the way.”

Dash left CT and headed downstairs, all the while CT had a final thought on the matter.

Poor lost soul. He has no idea he’s part of a game. 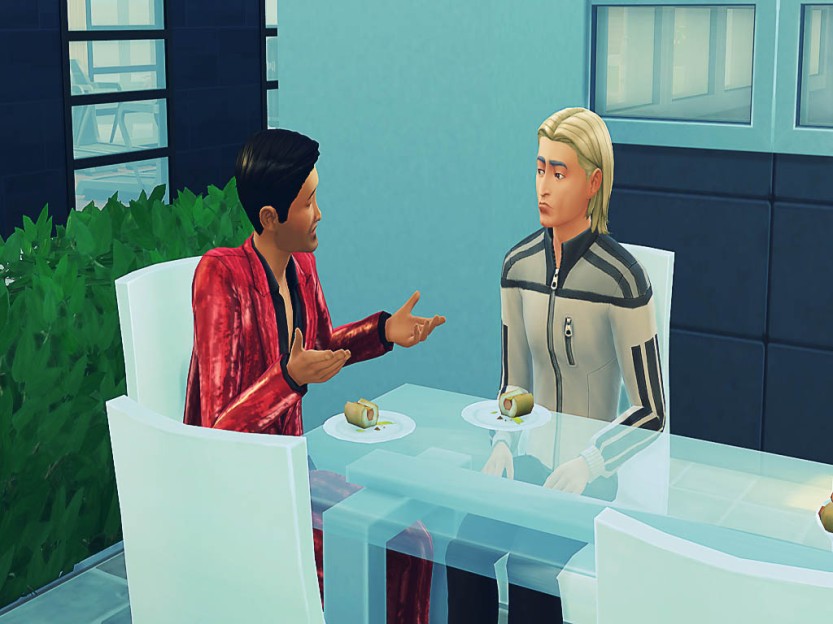 Ken sat down next to Saarang, “So Empy… You wanna meet the neighbours?”

“Not yet Ken, I’m a bit sore from working out yesterday. Give me a few hours.” 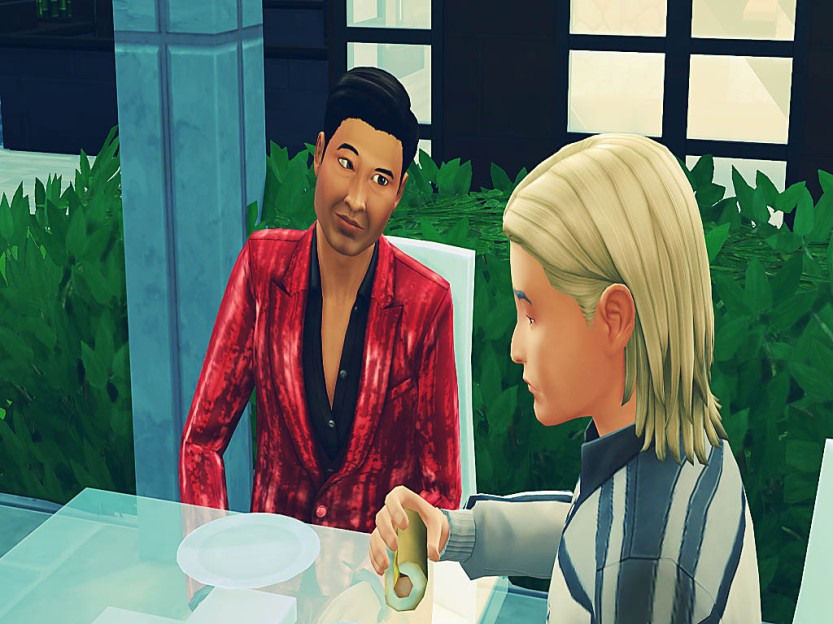 “Saaaaaaarang.” Ken tilted his head and gave him a flat stare, “Don’t be a little bitch!”

“Oh fine! Let me finish this and brush my teeth and we can go, alright!?!”

Dash walked downstairs and found four strangers sitting down chatting away. He sat down on the couch with an oomph, and turned to face the woman in the orange jacket.

“I was told there was an Elder down here, but you all look so young. Could you point me in the right direction?”

Everyone laughed as if Dash had told the funniest joke ever.

A blonde haired man with black glasses leaned forward. “I’m Elder. And it’s not my age, it’s short for Elderberry.”

“I’ll get out of your way, seems like your one of them.” said the woman sitting next to him as she stood up and continued to play whatever game she was playing on that tablet of hers.

A young woman swoops over the back of the seat, nearly falling over in the process, “I’ll take that!”

“So, what did she mean by one of them?” Dash asked.

“And then there was this GIANT swooshy chair. And no one could swoosh it because it was so big!”

Dash looked over at the young woman slightly confused.

“Don’t worry about Anne here, she does that sometimes.” Elder said. “Dash isn’t it?”

Anne got up and walked away, appearing to be distracted by something shiny. Dash slid over to sit next to Elder.

Dash frowned, “Fine I guess, but that didn’t answer my question.”

“This place your in. Even though it looks different, do you have a feeling like you’ve been here before?”

Dash nodded his head, “Yeah, now that you mention it I do.”

“This in “The Gallery”, a crossroads between games. I come here often as I’m looking for my son and his friends who went missing a while back.

“That’s terrible!” cried Dash, “Why are you so relaxed about it, if it was my own son I would be out all day every day searching for him.”

“Oh I am. But no time passes here, so this is the one place where I can put my feet up and relax. I often go down to the spa down the road to unwind” Elder produces a flyer, you haven’t seen them by any chance have you?” 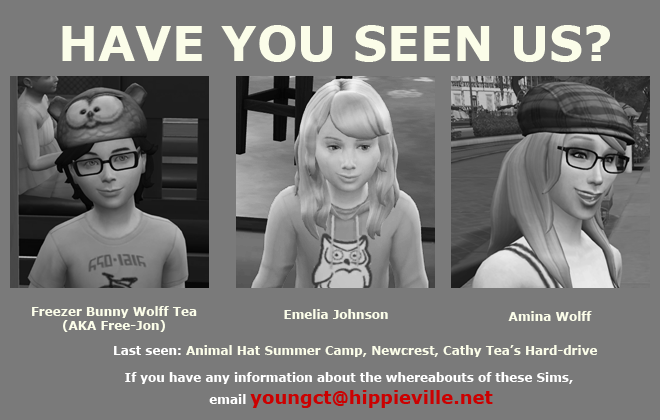 “Ah, no matter. I’m sure they’re having fun wherever and whenever they are.”

Elder stood up, “Never mind that, come outside and take your mind off things.”

Dash joined everyone outside and had a good time chatting away to these people. It wasn’t long though before there was a knock at the door. Dash got up to answer it.

“Whoa, you really are Ken Jeong! How did you get my number?” Dash asked.

“I have every ones number.”

“It’s true.” piped in the woman that had joined Dash in welcoming Ken.

Meanwhile Saarang let himself in, brushing past Ken and Dash and introduced himself to some of his neighbours. 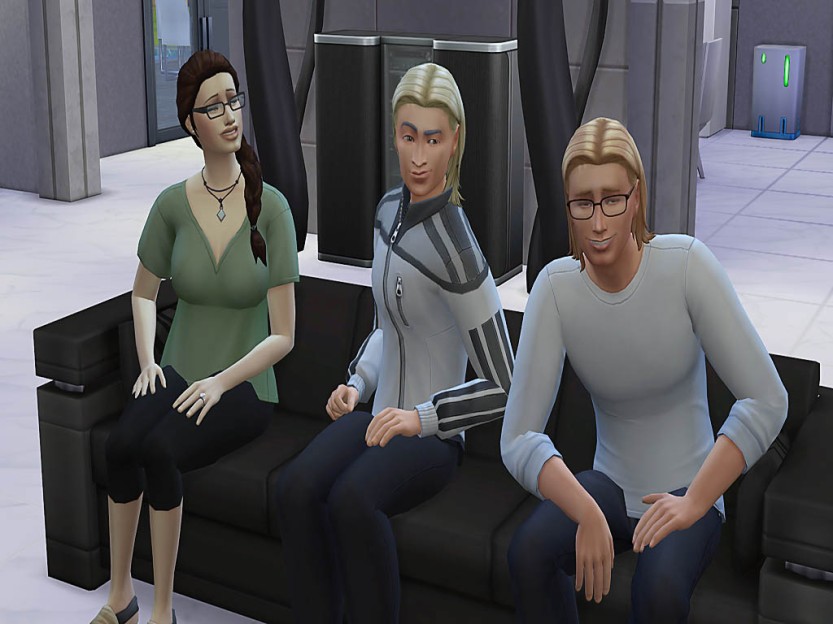 And after half an hour of chatting, everyone grabbed their things and headed to the spa. 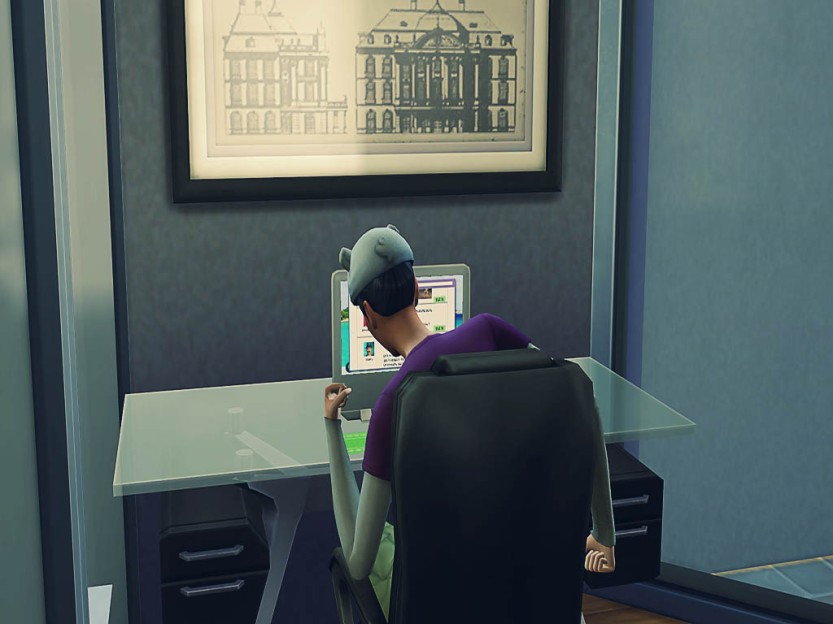 “YEEEES!! I got downloaded and favourited again!!!”

Here story-mode goes off again as we go through the screenshots of various simselves having good spa-times.

Here we have Meggles, BabyDollAnne, ThePlumbob and Dash having a go at yoga.

And so does ThePlumbob

While CT, Jes2G and Ken have a go at the heavy bag. (I’m really excited about this screenshot – I wasn’t sure that 3 sims would be able to fit at once!) 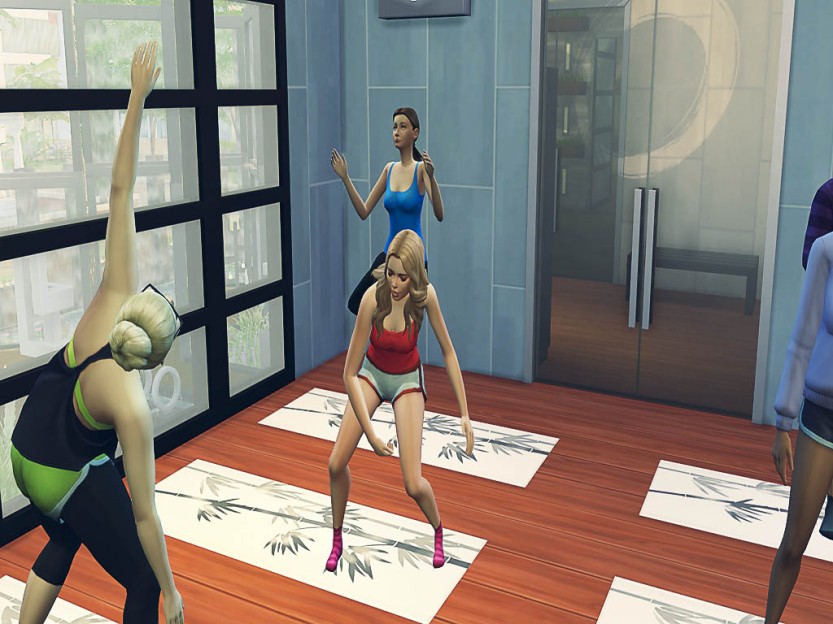 Not wanted to feel left out, BabyDollAnne has a bit of a stumble too.

And so does Meggles. Told you I would get the face!!! 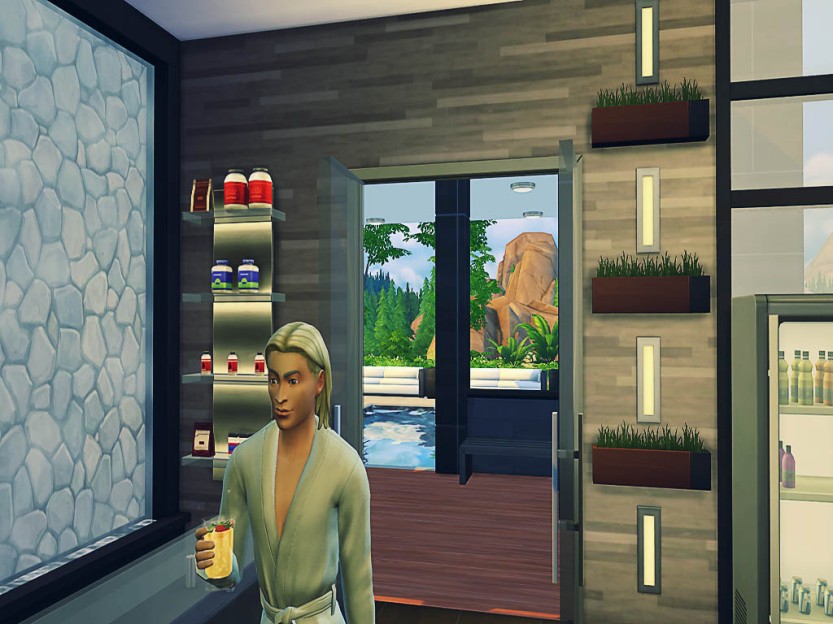 Empy is enjoying a refreshing drink. 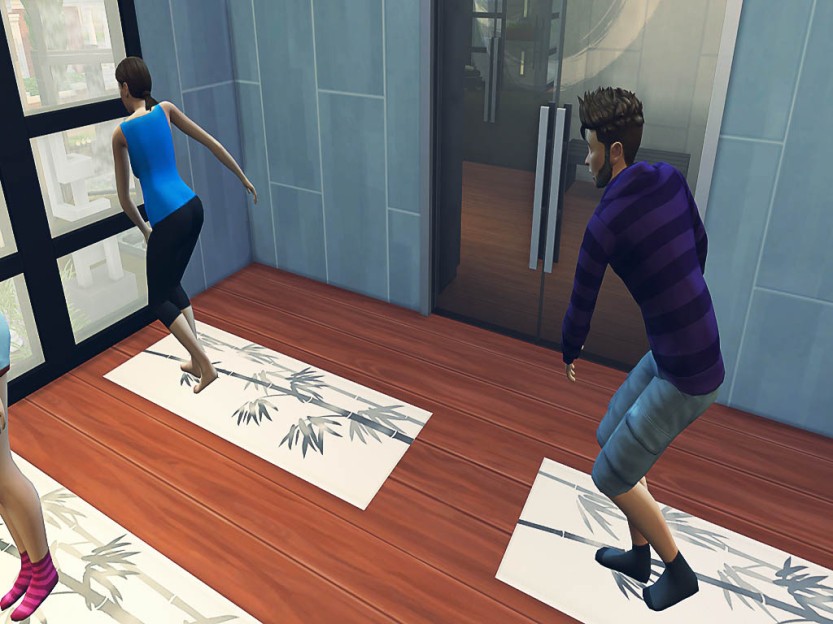 And Dash and ThePlumbob stumble once more. It’s like we’re “Stumble Buddies”!!! 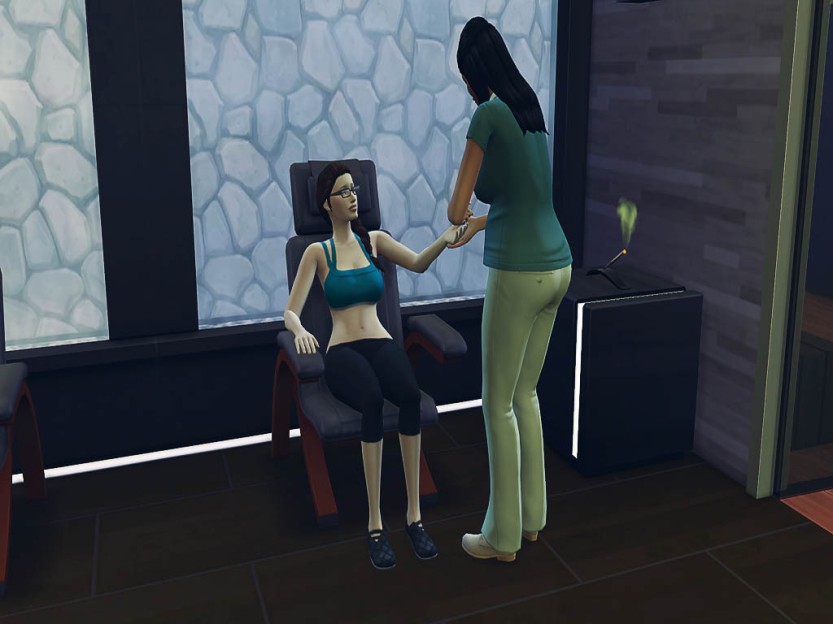 DreamsInPixels gets herself a nice manicure. (Reduced the number of seats to 2 as only two workers, and added end-tables with incense).

Everyone (bar Ken, because Ken is a doodle-head) met outside my Meditation Monolith and sat down to contemplate the meaning of life.

And that’s the end of Part 2. Hope you’re enjoying the ride. Part 3 will come out tomorrow with House 1 and the new changes to the spa.